Well, we're waaaay behind in our blog entries as we've already visited 12 places and are on our 13th one right now. So, instead of many individual entries, we're going to combine them into one only. Enjoy the photos!

WASHINGTON: The Dry Lake Falls were created by massive floods around 10,000 years ago. These cliffs are 400 feet tall and over 3.5 miles wide! The flood waters that came over the cliffs here were over 400 higher than you see here! This cliff area started 20 miles downstream and, as the water carved out the rock, it gradually moved upstream to where it is located today.

LIBBY, MONTANA: We have stayed here 3 times before but, even though the town's population is only 2847,  the RV park is set amongst the forest making for a camping-like experience.

Glacier National Park, east side. We came here to do one thing only....go kayaking in the glacier lakes....so we did!

HAVRE, MONTANA: First off, Havre is pronounced like "Have Her". We stayed one night only but the horses in the field in front of our RV like to come over to get some attention. Other than that, we just hung around the park and relaxed. 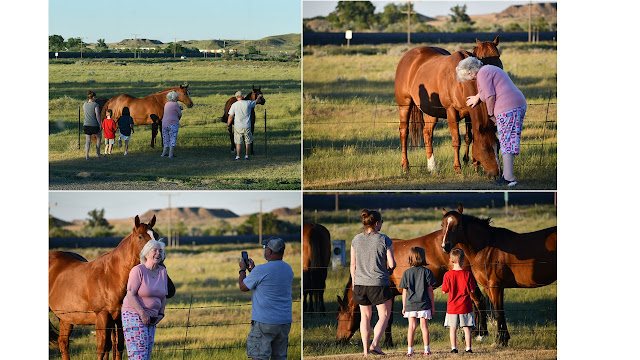 THEODORE ROOSEVELT NATIONAL PARK, NORTH UNIT: The large spherical boulders found here are called concretions. They are usually round but can be any shape. Concretions are formed within rocks by deposits of mineral around a core. 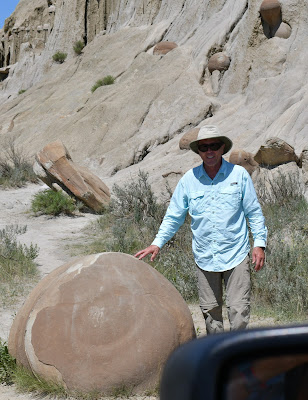 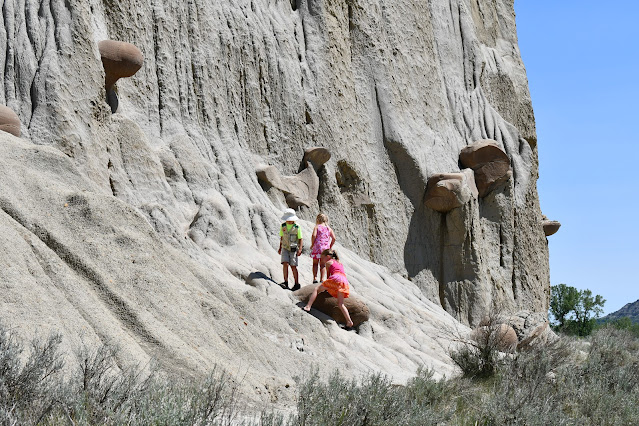 CUSTER STATE PARK: We saw a Fourth of July parade in Custer City, did a little kayaking, hiking and just poking around.

UNION PACIFIC GOLDEN SPIKE TOWER: This is the largest railyard in the country! Over 100 tracks going east and west ! Someday, I'll do a blog entry just about the workings of this place. Amazing! YOu can go here to view a live view of the yard in operation:
https://goldenspiketower.com/bailey-yard/live-cam/
Just some of the facts: Every 24 hours, Bailey Yard handles 10,000 railroad cars. Of those, 3,000 are sorted daily in the yard’s eastward and Golden Spike Tower overlooking Bailey Yard’s westward yards, nicknamed “hump” yards. Using a mound cresting 34 feet for eastbound trains and 20.1 feet for those heading west, these two hump yards allow four cars a minute to roll gently into any of 114 “bowl” tracks where they become part of trains headed for dozens of destinations. Together, these two yards have 18 receiving and 16 departure tracks.
Train operations and repair shops at Bailey Yard are open 24 hours a day, seven days a week. The fueling and service center processes more than 9,000 locomotives each month, using technology like overhead cranes and elevated work bays to maintain fluid operations.
Okay, that's it for now...hope you enjoyed all of this. It goes without saying that, each of these stops, could be a story in and of itself. But, rather than bore you to pieces with thousands of photos and text, we thought it would be best to summarize. Let us know your thoughts and we'll see you next time as we head down to see our boy in Atlanta with stops at Nashville, Shiloh, Savanah, Charleston and the largest dollhouse museum in the country!
kim/steve/katie
at August 15, 2021 2 comments:

We've already started our summer trip but never posted anything else for our May Nevada trip soooo..

This was an unexpected stop...did not realize how much there was to see and do...but we tried to fit them all in. Bodie, The Mill Town, a couple of kayak lakes, Tioga Pass, Mono Lake Tuffas, the largest Jeffery Pine forest in the world, an obsidian volcano and a mountain side of pumice.

Kim has always wanted to see the best preserved (and largest) ghost town in America, Bodie. So, we parked the coach at the Mono Lake Visitor's Center, unhooked our pickup and took a ride waaaay back into the hills to see Bodie.


Then, we decided to take a day trip with the car, just to explore and found the Mill that made the wood for all the construction at Bodie! 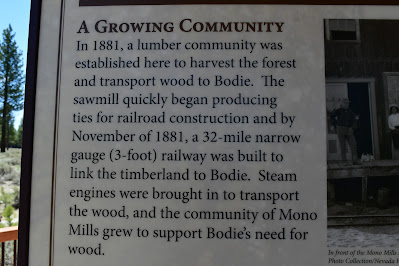 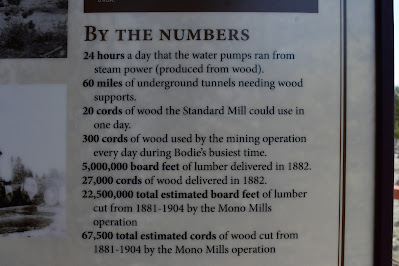 We also found out that the largest Jeffery Pine forest in the world is located right here so we drove into it a ways, had some lunch and just enjoyed the gentle breeze flowing through the pine needles.

Of course, we both enjoyed it in our own ways!

Hope you enjoyed tis one...we'll do more in a few days. 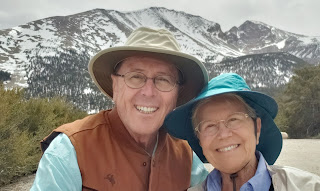 On the Bonneville Salt Flats

One of the places we've always wanted to visit...well, actually I've always to visit....is the Bonneville Salt Flats on the Great Salt Lake outside of Salt Lake City, Utah. We'll get to our visit in a bit, but first....
This is where the world land speed records are set for vehicles. The current speed record is 763.035 mph (1227.986 km/h (the record-breaking speed averaged over the 2 runs of the measured mile). This one was run at Black Rock Desert in Nevada which is west of Winnemucca, Nevada.

Just so you can see what are the fastest ones out there, here's a few of the upcoming challengers...these are cool looking!


So, we drove out on a paved road to the end, where I was really disappointed as I thought we would be able to go way out on the flats. But then, off in the distance, we saw, what we thought were small ATV-type vehicles coming towards us. As they got closer, we realized that they were CARS! We spotted them first about 10 miles out!

Once that lead car got onto the pavement, I went over and asked if it was okay to drive out there...was it soggy or wet or do I need 4-wheel drive? They said, "No", it's fine. We went out about 20 miles".
Well, that settled it for us. Off we went!

One last set of photos to show some perspective on how large this salt flat lake is...

Oh, one more thing...check out what the truck looked like after we got back to the car wash... 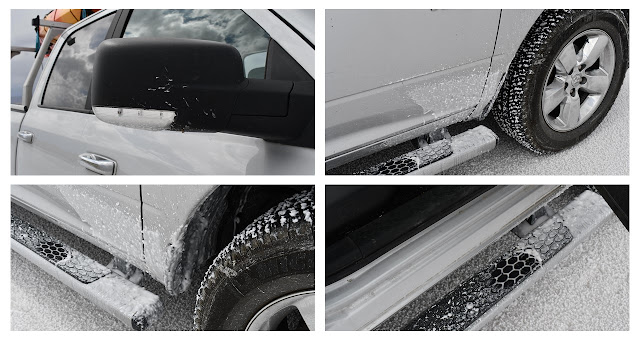 This was a pretty neat adventure and one that we'll remember for a long time. Thanks for viewing!
steve/kim/katie

Well, we're waaaay behind in our blog entries as we've already visited 12 places and are on our 13th one right now. So, instead of m...