Actually, the town is called Picabo, but pronounced Peek-A-Boo. The population is 128 souls in the surrounding 40 square miles consisting mostly of large ranches and irrigated fields. We stayed two nights and today I took a walk down the dirt road to the fly fishing river, Silver Creek, a mile each way.

The nearest flowing stream is Silver Creek, a scenic spring-fed tributary of the Little Wood River, a key source of irrigation water for eastern Blaine County. The pristine Silver Creek is renowned among fly fisherman and was a favorite of Ernest Hemingway, who enjoyed hunting and fishing along the stream with local rancher Bud Purdy. The name "Picabo" supposedly derives from a Native American term translated as "silver water".


We've been discovering that Idaho is gorgeous ! Scenic ! Way better than we expected ! ...can't wait to explore more of it in the years to come.

...thought we'd dropped off the face of the earth? Nope, just spending time in Idaho while our house is being planned and built. We've been here since June 17th. Thought it would be nice to post some terrific Idaho photos.

This one is all about the scenic Snake River Gorge just south of Boise. We drove about 45 minutes south from our RV site, parked the car and walked about 1/4 mile to the edge. This is what you see at first as you approach.....asking "what's the big deal"?

Then, you look over the edge of the wall....whoaaaaa!

The Snake River goes into the Columbia River, which ends up in the Pacific Ocean...just past Portland, Oregon.

Then, we went a bit further and descended down to the river level to an old power station (Swan Falls Dam) that was built for the silver mines way back. Swan Falls Dam is on the Snake River about 40 miles south of Boise. It was built in 1901 to provide electricity to nearby mines. Swan Falls is the oldest hydroelectric generating site on the Snake River. Idaho Power built a new power plant in the mid-1990s. The old plant is now a museum. Unfortunately, we were not there when it was open.

Now comes the most interesting part... 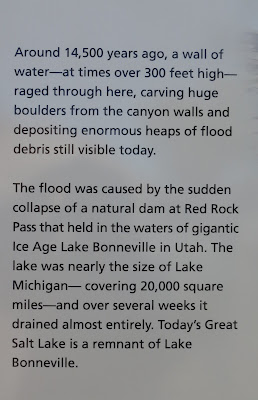 Then, we drove out up that steep road and took a few more photos before heading home....

Of course, no blog entry would be complete with some Katie photos...take a look at her new look !!


Well, hope you enjoyed this one....we'll be posting a few more of Idaho before starting our house construction blog.